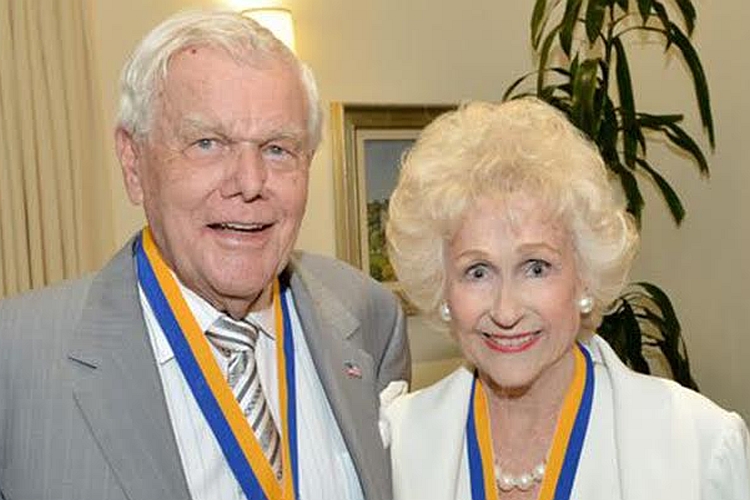 [Posted January 15, 2018] With the opening of the Collins & Katz Family YMCA on December 9, the question has been asked: Who are Collins and Katz? We can tell you!

The “Collins” is Jim Collins, who graduated from UCLA in 1950 and enjoyed a long career in the restaurant business as a franchisee for Kentucky Fried Chicken beginning in 1960 and as the owner (and expander) of the Sizzler Family Steak House chain from 1967. Now 91 and (mostly) retired, he and his wife Carol (pictured above) have been generous donors to a variety of causes, especially at UCLA (where he ran track for coach Ducky Drake) and the YMCA of Metropolitan Los Angeles.

The “Katz” is the Katz Family Foundation, founded by Ronald Katz, the creator of the Telecredit check-reference service that was ubiquitous in the 1960s and 1970s, and then Ronald A. Katz Technology Licensing (RAKTL). Katz later concentrated on call-processing services and accumulated more than 50 patents in automated call-center technology, licensed by his RAKTL firm. He also graduated from UCLA has also been deeply involved with the UCLA Medical Center and both the Metropolitan YMCA organization and the Westside Y.