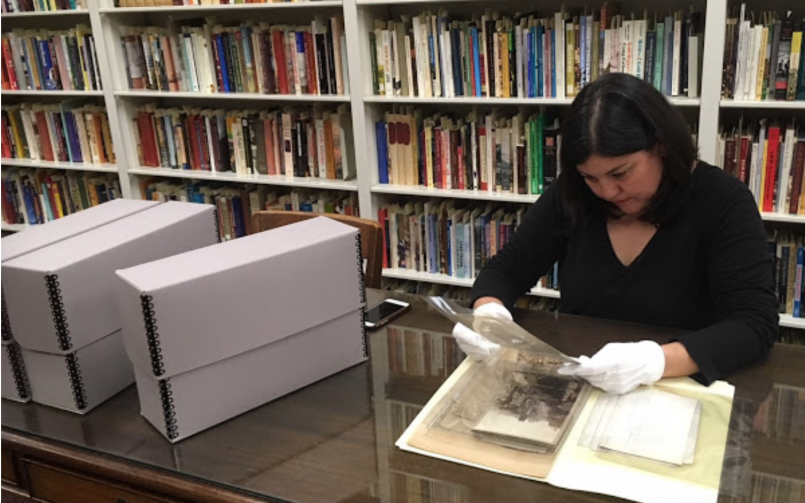 Erin Garcia, Class of ’88 and Student of Arnie Rubinoff, is a Curator for the California Historical Society

Erin Garcia, Class of ’88, is the managing curator of exhibitions for the California Historical Society, located in San Francisco. During the time that Erin was a student at Uni, she took photography with Arnie Rubinoff all three years. This passion for photography sparked here at Uni continued as she majored in Art History at Berkeley and earned a Master’s degree in Art History from The University in New Mexico with an emphasis on photography. She has recently an amazing exhibit called Boomtowns: How Photography Shaped Los Angeles and San Francisco on view at the California Historical Society, San Francisco October 12, 2018 through March 10, 2019. If you are planning to go to the Bay Area between now and March 11th, you may want to visit a fellow Warrior and look at these beautiful photos.

The press release reads, “Boomtowns looks at some of the earliest views of these places, who these cities were for, what forces shaped them, and how photography promoted and contributed to their growth. The exhibition invites visitors to look critically at photographs made for a broad range of purposes, from civic boosterism to real estate development, industry, and art. It also examines places where the competing interests of different groups led to layers of development and redevelopment—sites such as Union Station in Los Angeles, which was once Chinatown, or Washerwoman’s Lagoon in San Francisco, which became the Panama-Pacific International Exposition site and later the Marina District. The exhibition features important photographic work from the California Historical Society’s permanent collection by both anonymous photographers and well-known artists such as Ansel Adams, Laura Adams Armer, Arnold Genthe, Eadweard Muybridge, Carleton Watkins, and Minor White.”

If you do have the chance to visit the Bay Area between now and March 10, the California Historical Society and Erin are located at 678 Mission Street in San Francisco! If you don’t have the opportunity to visit before the end of the exhibit, you can see a few of the images here: https://www.kqed.org/arts/13843021/boomtowns-san-francisco-los-angeles-california-historical-society.