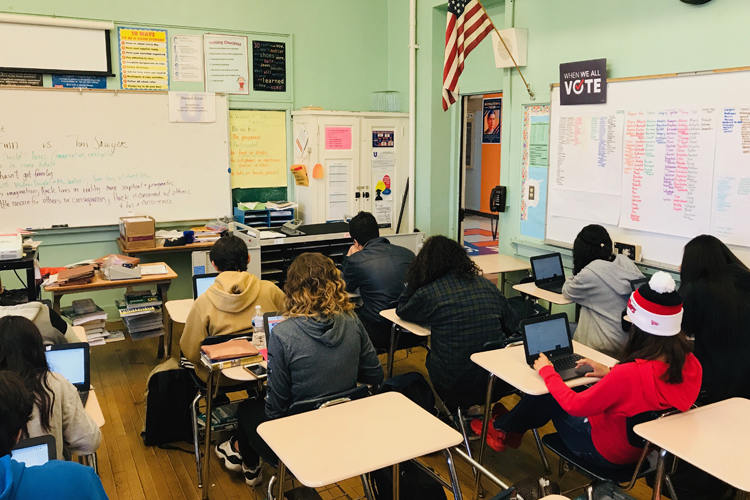 Ms. Vollmer is not a teacher who necessarily expected to be on the forefront of using technology in the classroom, but that is where she has found herself this year. This summer she pursued her longtime interest in psychology by taking a course at UCLA. In the class, students were asked to engage in online discussions using a forum similar to Facebook, wherein students posted short, informal essays and then responded to one another’s posts. Ms. Vollmer enjoyed this very much.

This year Uni’s Instructional Leadership Team started off our staff development with a spotlight on the functionality of Schoology, the distict’s online learning management system. During the course of the staff’s technology training, Ms. Vollmer realized that the Schoology platform also provides a forum for student interaction similar to the one she enjoyed using over the summer.

Ms. Vollmer was able to integrate both psychology content and an online discussion tool in her AP English Language and Composition class. She asked all students to apply Freud’s tripartite personality theory to the classic novel, The Scarlet Letter. In measuring Hester Prynne’s strength against the guilt-ridden Dimmesdale and the vengeful Chillingworth, students were able to analyze characters’ manifestations of the Freudian id, ego, and superego. As many of the students in her class have taken or are currently enrolled in A.P. Psychology with Ms. Mitchell, they were able to integrate the learning from these two rigorous A.P. classes in one assignment. Students were required to post their own analyses and then post at least two substantive comments in response to their classmates. Like social media, Schoology allows students to “like” each other’s comments. A high point for Ms. Vollmer was when the students gave her comments a thumbs-up. Even better, was seeing students who normally stay silent in class discussion take a very active role. Students are getting the benefit of face-to-face interactions along with guided written interaction and debate on a closed online forum.