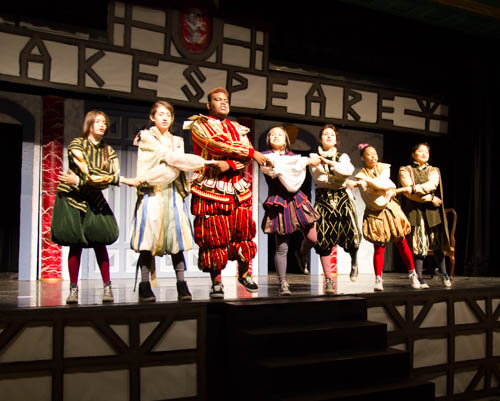 Pictured above: The Uni cast’s version of “To Be Or Knot To Be” . . . Get it? (Photo courtesy Ivan Finkle/UHEF)

“The Friday [school] Assembly audience greeted the performance with excitement and enthusiasm. One of the English teachers returned that night with three other English teachers to see the entire play.

“Any high school would be proud to have a production of this caliber on their campus. The ensemble, the set, the lavish costumes, and the laughs surprised audiences at every performance.”

There are still two more performances to come, on Friday, November 21 at 7:30 p.m. and a matinee on Saturday, November 22, at 2 p.m., both at the Stivelman Theater on campus. Tickets are available at the door, and there is ample street parking in the area. 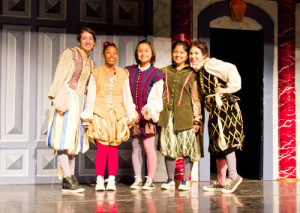 What can you expect? About the program, Sperling notes that “In a race with the clock, all of the Bard’s 37 plays are presented in just under 90 minutes. In a vaudeville style, actors speak directly to the audience during much of the play, and some scenes involve audience participation. Improvisation plays an important key role as the actors to deviate from the script.

“No two performances will be the same.”

See you at Stivelman this weekend!