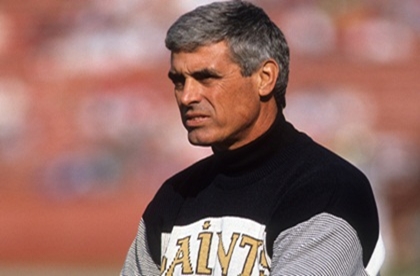 [Posted April 1, 2015] Two Uni grads who went on to fame as coaches will be inducted as members of the third class of the Los Angeles City Schools Athletic Hall of Fame on Sunday, April 26 at the Hilton Doubletree in Culver City.

Pictured above: Jim Mora, an all-League end at Uni who became a championship pro football coach.

Jim Mora ‘53, who was an all-league end at Uni, went on to become a highly successful coach in college and professional football. He held the head coaching position at Occidental College from 1964-66 (18-9 record), then used assistant coach positions at Stanford, Colorado, UCLA, Washington and Seattle and New England of the NFL to help land the head coaching position with the Philadelphia Stars of the United States Football League in 1983. He won the USFL title with the Stars in 1984 and 1985 (in Baltimore).

The USFL didn’t survive, but Mora was immediately hired by the New Orleans Saints, who he turned into a playoff team. In his 11 seasons, the Saints made their first four playoff appearances in history. He resigned in 1996, but then joined the Indianapolis Colts in 1998. He turned the Colts into a playoff team, making the post-season twice in four years. Over 15 years as a head coach in the NFL, he compiled a 125-112 record. He is currently a commentator for the NFL Network, and his son, Jim L. Mora, is the UCLA head coach.

Howard Enstedt ‘50 spent most of his time at Uni thinking about and playing volleyball. His teaching career eventually led him to Palisades High School, where over more than 30 years he won 10 City volleyball championships and sent dozens of his players to collegiate, U.S. national and Olympic volleyball teams. In fact, he’ll be in good company at the induction dinner, as two of his former players – Kent Steffes and Randy Stoklos – will also be inducted as City Hall of Famers in volleyball.

Mora and Enstedt are Uni’s second and third selections into the City Athletics Hall of Fame. Created in 2010, classes are inducted every two years. Uni legend Mel Patton ‘43 was selected as a member of the inaugural class, enshrined in 2011.

The public is invited to attend the Hall of Fame Induction Gala, with the dinner modestly priced at $75 per person. RSVPs are due by April 15.