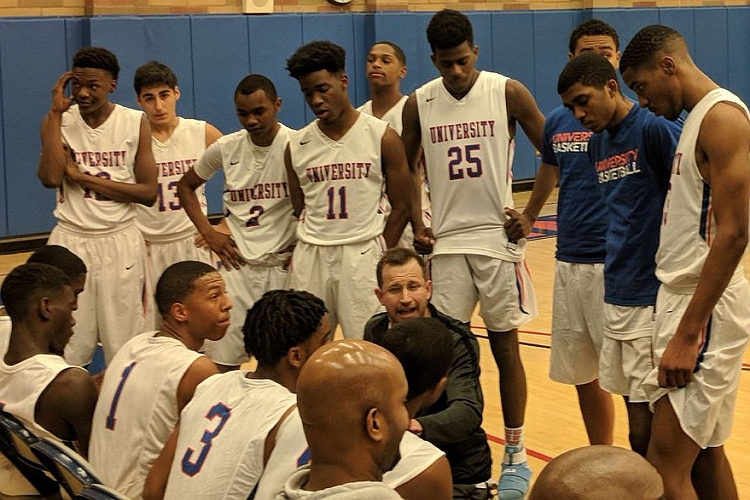 [Posted March 20, 2018] Uni’s 2017-18 boys basketball team will long be remembered for an outstanding season that ended with a 26-6 record and a second-place finish in the City Division 1 playoffs.

Coach Steve Ackerman’s squad was 23-4 in the regular season, losing only to City champion Westchester and runner-up Fairfax, both of whom happened to be in the Western League.

Uni was seeded fourth in the Division I playoffs and reached the final against third-seeded Washington Prep on March 3 at Cal State Dominguez Hills. The game was a classic, with Uni sprinting to a 34-24 halftime lead, but the Generals clawed their way back into the game, narrowing the lead to 44-41 at the end of three quarters.

Senior guard Richard Wilson led Uni with 16 points on 7-of-13 shooting from the floor, while senior guard Daisone Hughes and soph forward David Cheatom each had 13. While the Wildcats shot 48.1% from the field, Uni made only 6-16 free throws (37.5%) and was out-rebounded, 36-31.

As the runner-up in City Division I, Uni qualified and was seeded second in the California State Division III tournament, opening with a home game against Reedley Immanuel. Uni piled up a 44-23 lead by halftime and cruised home with an 86-60 win, thanks to 33 points from Hughes and 20 from Cheatom.

In the regional quarterfinals, Uni hosted Bishop Amat (27-6) on March 10. The Lancers raced out to a 38-21 halftime lead, but the Wildcats fought back with a 22-13 edge in the third quarter to close to 51-43 at the end of three quarters. In the fourth, Uni got to within two points at 55-53, but that was as close as they got. Bishop Amat held on for a 66-59 win and advanced to the regional semis.

(What happened to Washington? Top-seeded in Division III, they also lost in the regional quarters, to Notre Dame, 73-70, at home.)

The loss ended a great season for Uni, but one to be proud of. It’s the second straight season with 20 or more wins for Uni and the Wildcats compiled a two-year record of 47-16. Congratulations!