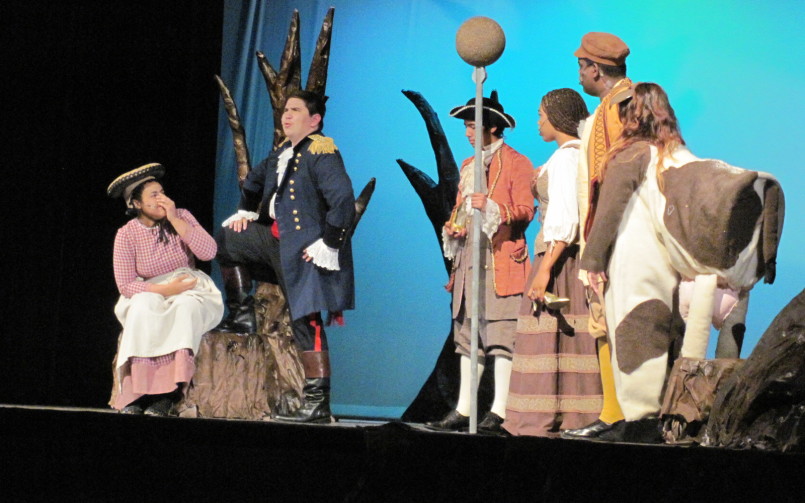 [Posted May 8, 2015] An enthusiastic cast and an equally-happy audience enjoyed the debut of Uni’s Spring 2015 production of “Into The Woods” at the Stivelman Theater on campus on Friday evening.

Pictured above: Billy Ortiz as Cinderella’s Prince, pines for the girl who fits the golden slipper (Photo courtesy UHEF)

From the energetic opening that filled the stage to Sarai Benitez’s charming portrayal of Little Red Riding Hood, the program moved briskly through the tale of the Baker (Ryan McNeil) and his wife (Alex Strong) who were childless due to a curse placed on them by the Witch (Katherin Flores).

Those familiar with the show from its long theatrical runs, or the motion picture that starred Meryl Streep, enjoyed the energetic performances from McNeil and Strong, a sensational transformation of the Witch from foul to fair near the end of Act I and the tale of two princes (Billy Ortiz and Rashley Castillo) seeking love from Cinderella (a triumph for Claire Hafteck) and Rapunzel (convincingly played by Lauren Meltzer), respectively.

The sets and lighting were marvelous, as were some of the hilarious sound effects that spiced the program throughout. 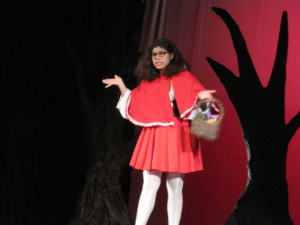 Little Red Riding Hood (Sarai Benitez) is a little worried about heading into the woods!

Produced by University High School’s Director of Theater Arts Ronnie Sperling ‘76, the 105-minute show (including one, 15-minute intermission) has a cast of 23, including (alphabetically): 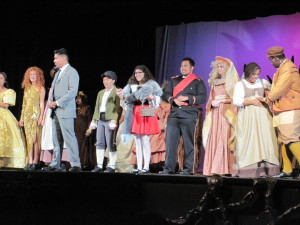 A happy ending to Act I, but there was much more to the story to come in Act II!

There will be three more performances, all at the Stivelman Theater on campus (11800 Texas Avenue, Los Angeles):

Tickets can be purchased online, in advance of the show date, at BrownPaperTickets.com. Online purchases carry a 99-cent fee plus a 3.5% charge for credit-card processing (about $1.17 for a $5 ticket).

Tickets purchased in advance are $5 each at the Uni Student Store, and $7 at the door (cash-only), except for the after-school performance on May 14 ($2).

Ample street parking is available around the Uni campus. The Stivelman Theater entrance is on Texas Avenue.