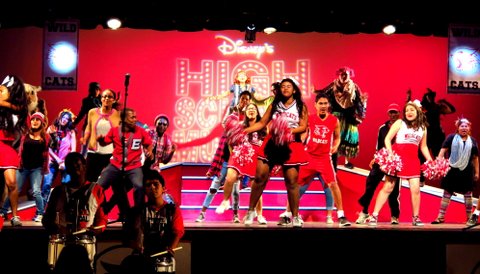 [Posted May 2, 2016] Roaring crowds and a high-energy cast made the Uni production of Disney’s “High School Musical” a great success from April 26-29.

Pictured above: The entire cast does the Wildcat cheer! (Photo courtesy Ronnie Sperling/UHEF)

With one of the largest casts ever for a Uni show, there was plenty of action on the stage for all four performances, including a 3:30 p.m. matinee on April 27 which included students from Uni-area middle schools!

Attendance was excellent, including a full house on Friday evening for the closing performance, which was christened “Dick Agbabian Night” in honor of the 1975 Uni alum (and thespian), whose family is raising money for his continued care.

Uni’s Director of Theater Arts, Ronnie Sperling, was more than pleased: “Disney’s ‘High School Musical’ was a major hit for Uni High. So nice to see large crowds at all performances. Just like ‘The Rocky Horror Picture Show,’ I was surprised when audiences started singing along with the actors.

“[Choreographer] Lindsey Lorenz’s dances were – dare I say it – better than the original movie. And of course having a rocking, LIVE Drumline, state-of-the-art, rock-concert lighting, perfect costumes, and inventive sets all helped to make my vision come through.

“At one performance, we had a very special guest: Stephen Vincent. Stephen is the Music Supervisor for all of the ‘High School Musical’ movies and a Uni alumnus. He is currently working on ‘High School Musical 4.’ The cast got to hear, first-hand, what goes into making a movie musical.

“As Summer approaches, we are already looking forward to our exciting 2016-17 Theatre Season where we will present ‘The Fantasticks’ – the longest running musical ever, and ‘Shrek the Musical.’ Add to that that Stivelman Theater will be undergoing some major renovations this July! This will only make University High am even greater place to be involved with Theatre Arts.”

Highlights of the show have been compiled into a PDF-format photo album, which is available here. The show program? Check it out by clicking here!

Couldn’t make it? Want to see what all the fuss was about and enjoy the show for yourself? No problem: New Chapter Productions created a high-quality DVD of the show, available in High Definition ($30) or Blu-Ray ($35) formats. You can access the order form here. 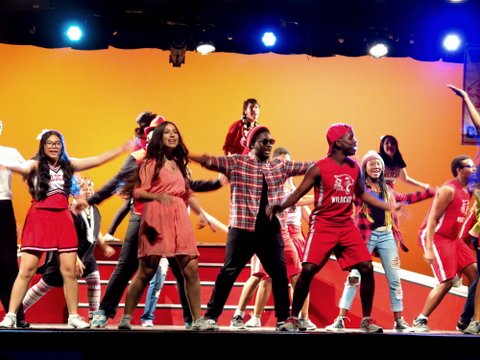 Uni’s Theater Arts program is supported by UCLA’s Beyond the Bell program for the performing arts.