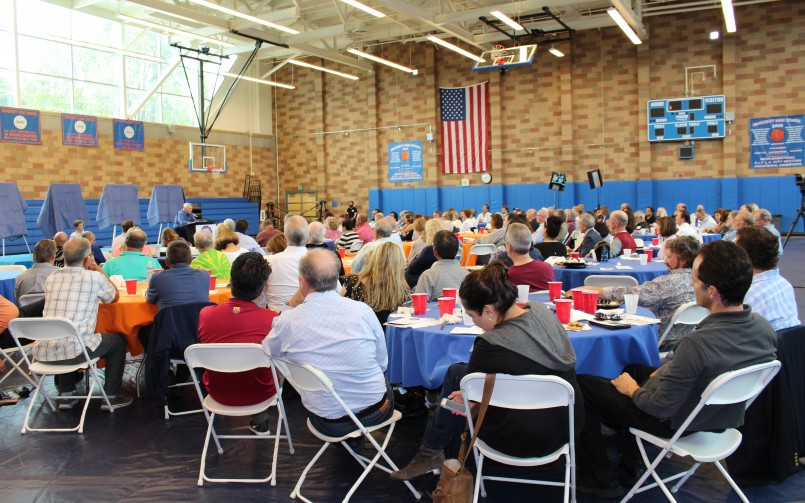 Remembering the days of Cavanaugh, Patton and Kampmann

[Posted May 22, 2016] Nearly 150 former coaches, teachers, administrators and students crowded into Uni’s South Gym one week ago to celebrate the unveiling of plaques commemorating the naming of Kampmann Stadium, Patton Track and Cavanaugh Field.

Pictured above: The crowd at the Kampmann-Patton Honors Luncheon on May 15 (Photo courtesy Jan Fambro)

The event drew the attention of Los Angeles Times prep editor Eric Sondheimer, who attended and included a review online.

What came through most during the 90-minute program was the impact that each of the three men had during their time at Uni.

“The most important thing that Angus Cavanaugh did during his tenure at this school was to establish the Westwood Village Rotary Club. I don’t know if you guys know that, but that’s one of the strongest organizations we have: Rotarians.

“Is this fair?
“Is it the truth?
“Will it build goodwill and better friendships?
“And then lastly, will this be beneficial to everyone?

“I believe it is appropriate to compare the past to the present, because as natural as [school] turf was then, over the years it is now artificial in its composition. But it remains consistent in its purpose. …

“So at the end, it’s the pursuit of truth, fairness, goodwill, better friendships and common benefit to all that is enough to inspire us all to be like Angus Cavanaugh. And this field is dedicated in his honor. Thank you so much.”

Most sports fans know who Usain Bolt is, the great Jamaican sprinter who won three gold medals in the 2008 and 2012 Olympic Games. Patton biographer Larry Booth explained how impressive Patton’s achievements were in his era.

“Mel is in the Track and Field Hall of Fame. He won two Olympic gold medals. He never lost in high school. His high school records lasted for decades in both the 100 and 220. He never lost in college, winning five individual national championships. Remarkably, he never once false started. He was the no. 1 sprinter in the world six times. He set seven world records.

“In 1948, just before the Olympics the cover of the two big national magazines, Time and Life, were full-size pictures of Mel Patton. He was the face of the Olympic team … I have in my hands, original, 70-year-old editions of both.

“He broke Jesse Owens’ world records and Jesse’s coach said Mel was better than Jesse. Dean Cromwell, the most famous track coach of all time, said Mel was by far the fastest human of all time.

“Back in the day, Patton ran on cinder tracks which were uneven and hard as a brick. Mel would have thrived and run even faster on an artificial track like the new Mel Patton Track at Uni. At 6-feet and 147 pounds, he was rail thin. With today’s weight training, on this track, there is no one in history who would have gone faster.”

Patton’s Uni record of 9.8 seconds in the 100-yard dash stood for 32 years until Kampmann-coach David Duffy ran 9.7 in 1974. And Duffy was at the luncheon and took a bow as the generational tie between the great Patton and his coach, Jim Pursell, and the Kampmann era. 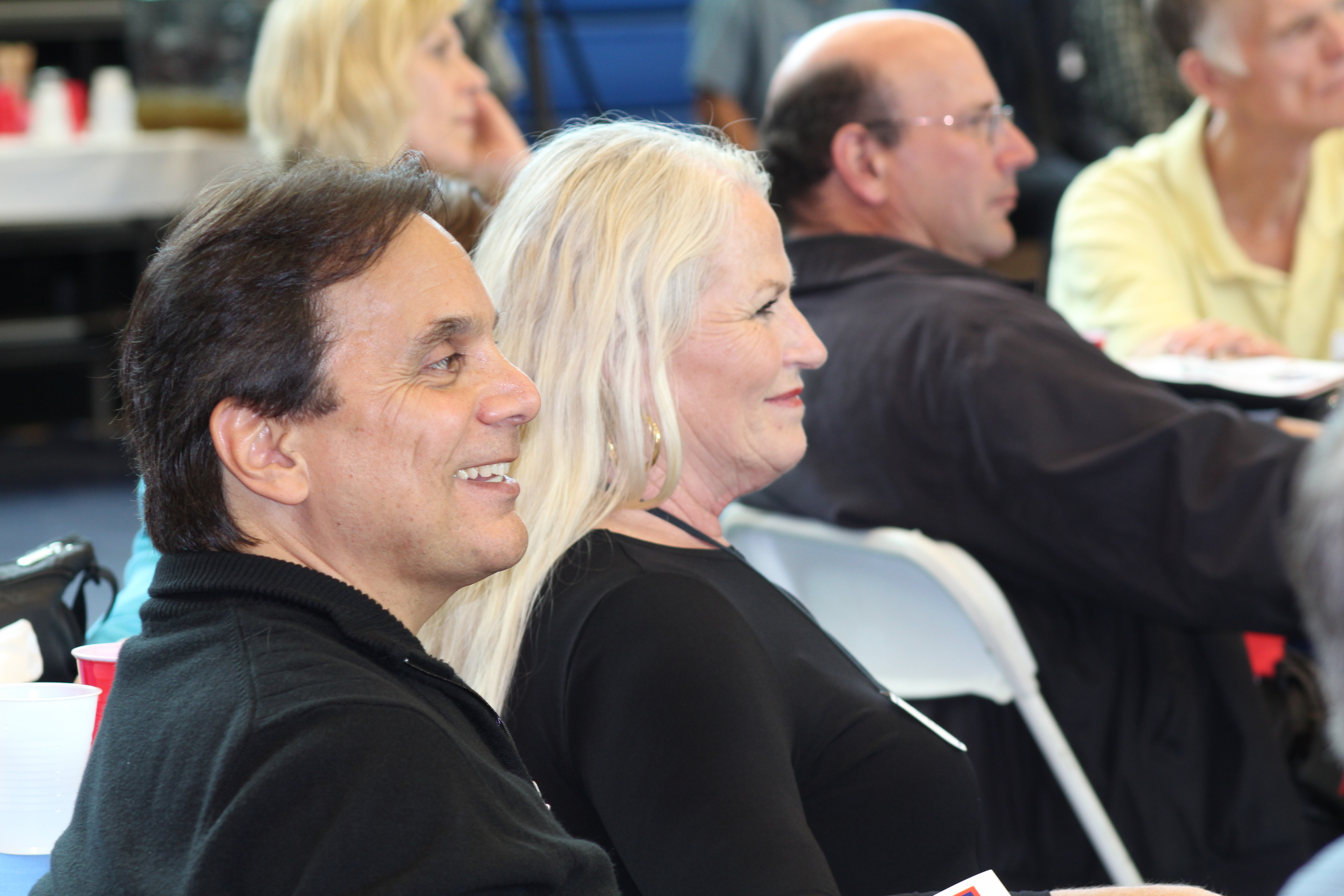 Four of Kampmann’s former runners were on hand to salute him, across the 25 years of his coaching career as Uni. Steve Baum, who was the 1968 Los Angeles City cross-country champion, gave this tribute:

“When I started in 10th-grade cross country, I didn’t know what I was doing, but I loved it and we went to the City championships – we were [in the] 10th grade [race] – and I said, ‘I want to win. I want to win that race.’ And because of you [looking to Coach Kampmann], I did.

“Two years and change of working my butt off, completely inspired – just wanting to – believing in myself, because you did. So, thank you.

“I arrived here as a tall, skinny 10th grader. I was dreaming of basketball glory, until one game against Crenshaw made me realize that was never going to happen. It was pretty crushing, but I loved to run, so I had done a pretty good 600 [yards] at Emerson, and my P.E. teacher was John Kampmann [Coach K’s younger brother]. So one day after signing up for cross country, I knew I had found my home.

“But the late ‘60s were a very turbulent time. The world was upside down and the changes that came with being 14 or 15 years old at that time – changes [that] are pretty universal regardless of what’s going on – in my case, being a virtual only child, kind of an outsider by nature, I needed to be part of something. And cross country was perfect, and I suspect a lot of people here were cross-country athletes.

“It’s a team sport. Everyone undergoes the same ordeal, confronting their limitations. Beyond that, being part of Uni cross country was being part of a winning team, a winning tradition, among the City’s best every year. And that success was not accidental or due to an abundance of talent, but our shared desire to become the athlete and the person that Coach K knew we could be.

“And that demanded a huge commitment, plenty of pain, but we loved it. We rooted each other on, wanting to please the man who never neglected to acknowledge our accomplishments, no matter how big or small.

“He wasn’t particularly warm or fuzzy. During my day, he was still influenced by the kind of hard-ass, drill-sergeant school of motivation. It really wasn’t until the next year, the City championship track team of 1970 – with those wild, un-tameable cast of characters – that he began to let his hair down and change with the times.

“But even then, though he was tough and demanding, he was never cruel, never demeaning. He expected a lot, and gave more. And being on his team was being part of a family – which is obvious here today – but was harder to realize at a time when family was something that many of us longed to escape.

“For me, the son of a father for whom nothing was ever good enough, Coach provided the acceptance and the inspiration I needed so desperately to accomplish what I wanted. Life isn’t easy as we all know, but I can think of no other human being who help prepare me for the challenges that lay ahead than this man, whose decency, patience, sense of fairness and unflagging commitment – not to mention a very cool car [Coach’s famous ‘57 Thunderbird ] – inspired me for the first time in my life to believe in myself … even though I would never be a basketball star.”

There was a lot to take in at the event, and with thanks to photographers Jan Fambro and Ivan Finkle ‘50, here’s a look at the event in pictures: click here.

A DVD of the event, including video tributes from attendees, as well as the full program, will be available in the coming weeks. Please look for order information on this site.