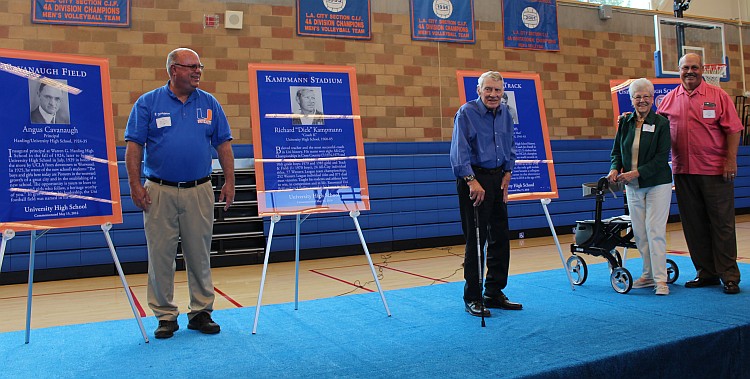 [Posted May 16, 2016] Four massive acrylic plaques were unveiled at a gala luncheon at the University High School South Gym on Sunday, May 15, to mark the school’s new athletic facilities as Kampmann Stadium, Patton Track and Cavanaugh Field.

The plaques measure 30 inches wide and 40 inches high, and are made of solid acrylic to ensure durability and resistance to vandalism. Each weighs about 20 pounds and will be installed on the north exterior wall of the South Gym, facing the football field and track.

The program celebrated the excellence for which the Uni cross-country and track & field teams have long been known. Mel Patton ‘43, won All-City titles in the 100 and 220 yards in both 1942 and 1943 and established school records that were not broken for more than 30 years. He went on to win two gold medals in the 1948 Olympic Games in London and set multiple world records in the sprints from 1947-49, while winning five NCAA titles at USC. Dick Kampmann coached eight Uni teams to All-City titles from 1960-85 in cross country and track & field, with 24 individual City champions, 77 Western League championship teams and 252 individual Western League title winners.

Former Uni high jumper – and later a principal and regional administrator for the Los Angeles Unified School District – Bob Collins ‘63 led off the event by presenting an award recognizing the inclusion of Kampmann and Mel Patton into the LAUSD honor roll of outstanding graduates. Some 1,250 have been named to date and more nominations are being solicited.

Mel Patton was honored next, with his career introduced by historian and Patton fan Larry Booth, whose book – World’s Fastest Humans – was distributed to attendees as a memento of the great sprinter. Booth broke up the audience with the memory of his first meeting with Patton, then the coach at Long Beach City College:

“I ran track for three years in high school and I thought I was hot stuff. So at the first meeting of the Long Beach City College track team I summoned the courage to go up to my boyhood hero, the great Mel Patton, and I told him I had the largest scrapbook of his clippings in the world, which I had collected since I was in grammar school. I’ll never forget what he said: ‘That’s great, but can you run fast?'”

Although Mel Patton passed away in 2014, his wife, Shirley Patton was on hand and in excellent spirits, answering questions about her and Mel. Asked what Mel would think about the ceremony, the naming and the plaque, she said “He would have been surprised, and pleased.”

She recalled how they were childhood sweethearts at Emerson Junior High School, sharing the same homeroom class, but after a tiff in the eighth grade, Shirley decided to go to Hamilton, while Mel went on to Uni. They made up in the 11th grade, started dating again and were together through his passing, two years ago.

After high school, World War II was in full force and Mel went into the Naval Air Corps to be a fighter pilot, but didn’t see action before the war ended. Shirley and Mel were married after his discharge and he went on to USC, running track under the legendary Dean Cromwell.

Shirley was at home in Los Angeles during the London Games in 1948 and news of the results of the Games traveled slowly in those days. “He went off [to London] and they [the press] called me and said ‘Why didn’t he win the 100 [meters]?’ I was in California. I had no idea and so we decided – his folks and I – and we went to Sequoia to get away from the telephones and the people. And he came home and continued his career [at USC] and he became a coach in 1949 at Long Beach State.”

Patton was famous, but didn’t strive to capitalize on his fame, but sometimes it helped. Shirley remembered that after 10 years at Long Beach State:

“Someone called is and said, ‘We’d like you to come to Wichita and be the coach there.’

“‘What will it take to get you there?’

“And then we were stuck. He got off the phone and said, ‘Well, that takes care of that.”

The Pattons stayed at Wichita for one year only, then came back to Southern California, eventually joining the staff of Northrup Corporation and started a distinguished career in the aerospace industry.

Uni Principal Eric Davidson, the 16th principal of University High School, spoke about the first principal, Angus Cavanaugh, for whom the football field has been named for decades. He noted that there were a lot of differences between how Cavanaugh ran Harding High (and later Uni after the name change) and how he administers the school today. Speaking first about the area that is now the football field named for Cavanaugh, Davidson noted:

“[I]t didn’t become a field magically, There was a walnut grove where the track and field is now. So what he did was he gave all of the students axes, and they chopped down all of the trees and cleared the field of the stumps.

“He gave all of the students axes. Now, let go forward 90 years … (laughter). OK, I would be arrested … but I would have to say that it was very innovative and economical in terms of solving this problem. It only cost him the labor of the students and the love of competition to get it done.

“Second thing: in 1928 – give or take – the country was barely a decade out of the first World War. When you look at the panoramic pictures of that time, you see all of these young men, standing at attention in uniform, and at the same time there had been a rifle range built inside the school and those classes were held up until 1943. So, they were arming students with rifles in 1943 … (more laughter).

“But Mr. Cavanaugh listened to what students wanted to do and they wanted to shoot rifles and so he made that possible for them. Wow – if I did that, I’d be arrested again! (More laughs.) But on the other hand, I use a similar connection with students that gives me a chance to establish classes and programs for students, that keep them interested and then on-track for college and career.

The salute to Kampmann brought up four individuals who were members of teams in 1960 (Kampmann’s first team), 1969, 1973 and 1980. Harvey Stein ‘60, who was Kampmann’s first-ever Western League champion – 880 yards in 1960 – knew all about Mel Patton when he started at Uni in 1958, provided a marvelous insight into what Coach K meant to him and the thousands who followed:

“My coach for the first two years was Jim Pursell, who was an excellent, excellent coach. So when Coach Pursell retired, and Coach Kampmann came on board, he really had big shoes to fill. He did so, and he filled them to overflowing.

“When Coach Kampmann did, is he instilled in all of us a spirit of competition that today – and I am 73 – I still have with all my heart. Anyone who knows me, knows that.

“But what he also did is he instilled competition with decency. And that’s what set Coach Kampmann apart and that’s why this stadium is named for him. And that’s why there were hundreds of people who turned out for his birthday party a year and a half ago.

“Coach Kampmann, at his retirement from Uni, some 30 years ago, told my wife – who is here now – that he always thought that I ran better than I could. And I think that says much more about Coach Kampmann than it does about me, because it shows what he was able to pull out of his athletes. …

“When I started Uni – and I say this with all respect – Mel Patton was my hero. He truly was. When I graduated Uni, Coach Kampmann was. Thank you.”

Kampmann reminisced about his path from Gompers Junior High School to Dorsey, where his team ended a Uni undefeated streak and earned the respect of Pursell, who recommended him as his successor. (Kampmann tells the story in greater length in this post from his 90th birthday party a year ago.)

After his remarks, Davidson, Kampmann and Shirley Patton stood next to the unveiled plaques of Cavanaugh, Coach K, Mel Patton and the donors, to the delight of the attendees and more than 100 cameras preserving a memory that took 90 years to create.