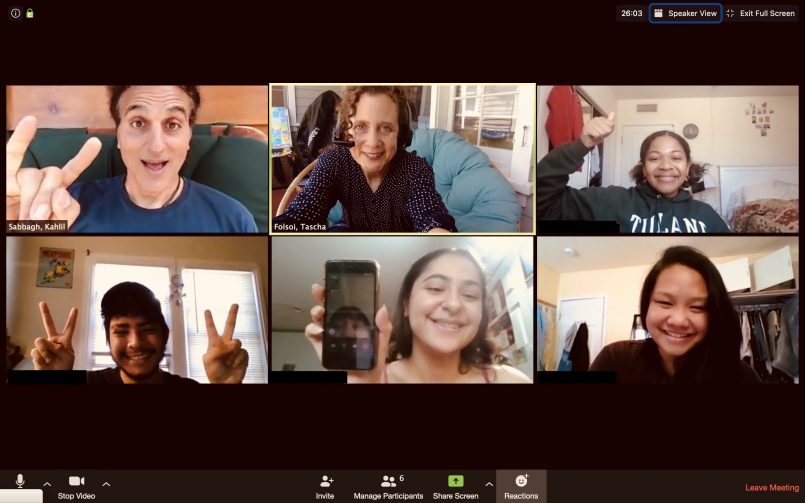 What can I say dear Warriors and Wildcats?  These are strange times.  If you’re like me, you knew something was coming.  You just didn’t know what it was.  Would the effects of climate change finally accelerate like a swimming pool in need of cleaning, slightly cloudy one day and completely opaque the next? Would the rise in homelessness lead to an uprising of people with nothing left to lose against people who have more than they can ever use?  An earthquake? A war on our turf?  A robot takeover?  Who knew?

Well now we know. It’s a plague, and of course this answer only introduces many more unanswerable questions that run the gamut from the gravest to the most trivial. Will I die when we go back to work?  Will I still have a job? Will there be a World Series? How do I feel about Rand Paul with a lumberjack beard?  Does dropping off groceries on the front lawn for my parents and yelling at them from the car count as a visit?  Is garlic essential and should I risk my life to get more?  Is it okay to get a ladder and climb the fence to steal lemons off the tree of the abandoned house on the corner?  What do people think when I don’t turn on my camera during Zoom meetings?  What do I think when other people don’t turn on their cameras during Zoom meetings. Did I wash all the eggs?

For teenagers, the questions are both immediate and existentially deep.  Are they just trees falling in a forest with no one to hear?  What does it mean to work so hard to graduate with honors and certificates and medals if there is no ceremony to celebrate it?  And on the flip side, what does it mean to have barely scraped by -or even to have failed- if there is no ceremony to say one could have done better?

Teens have grown up in a society uniquely obsessed with documenting their lives on camera. But now that their interactions are confined only to that screen, it’s disorienting to say the least.

But we have to adapt, take up new tools, build new structures.  And there are many Uni stars doing just that. The students in the Zoom meeting pictured at the top of this post are convened to learn how they will record Stevie Wonder’s Don’t You Worry ‘Bout a Thing via Zoom as a send-off for our seniors.  We may not have the budget for a professional company to cut together a dozen remote musical performances into one piece, but we do have students who know how to record their part of the track and we have Mr. Sabbagh, a certified ProTools instructor, who is working at the time of this writing to put that project together.  Spanish teacher and class of 1974 alumna, Dayle Fuqua-Caballero, has been collecting images of teachers holding congratulatory messages for our seniors, which will be the slideshow accompanying this long-distance rendition of Don’t Worry ‘Bout a Thing.

Akira Shelton, pictured in the top right box of the Jazz Cats Zoom, has been been involved in nearly every aspect of making sure that the Class of 2020 still sees one another and sees itself as a coherent class.  She is in charge of three separate social media accounts, including Class of 2020, Uni Leadership, and Uni High Theater.

Even Akira, with school spirit to spare, began to worry when Superintendent Beutner announced there would be no more school. What about the seniors? Would they just be forgotten? She wrote a letter to Nick Melvoin, our representative on the school board, and CC’d Monica Garcia and Austin Beutner, asking what they planned to do for the seniors who had worked so hard for the recognition and celebration of a graduation.

When Mr. Melvoin, emailed her back, she asked that senior class leaders have a seat at the table in deciding what a graduation would look like for them. He arranged a town hall with all of the senior class leaders from Local District West and plans were soon underway for an official virtual graduation. The district also made a commitment that there will be an in-person ceremony when it becomes safe to have one.

In addition to designing and managing three of the school’s social media accounts, she is receiving all of the senior portraits and entering them into an official presentation that will be one part of the virtual graduation.

We don’t know what the future holds for us. We are still figuring out what it means to be us while we are separated from one another –from the people for whom we are that in-person, public version of ourselves. But we are sure we have much to celebrate –the accomplishments of our students and the love and the shared commitment we all have for our Uni community. Thank you for remaining part of that community. We feel your love.