[Posted April 15, 2015] Hard hats and safety vests were distributed to a half-dozen Uni alumni and supporters on April 7, who toured the remarkable new football field now almost completely installed, with the all-weather track to follow.

Steven Oh of Ohno Construction, which is managing the installation, described in detail the new, state-of-the-art field, featuring AstroTurf 3D60 Extreme. Although a synthetic carpet, the look and feel of the fibers are very much like grass, but with considerably more engineering above and below it.

Under the turf layer is a half-inch-thick Brock International “shock pad,” designed to absorb energy in order to lessen the impact of collisions between players. The “give” in this layer mimics a natural-grass field, but also allows drainage through it to keep the playing surface dry. 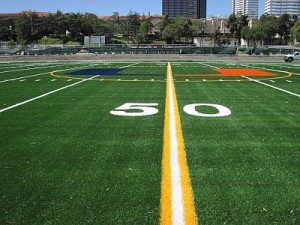 The “U” logo at the 50-yard line (Photo courtesy UHEF)

Workmen were busy distributing the first of 105 tons of specially-selected sand across the top of the entire field to help hold the turf down. Properly maintained, this new field will last from 8-12 years and will be available for both football and soccer. There is a slight, almost imperceptible crown of a 0.5% slope to help with drainage, topped by an orange-and-blue letter “U” at midfield.

The base layer of the new, all-weather track has also been completed and the pouring of the world-class Rekortan S surface (sandwich system) will proceed in May. After curing and then lining, the field and track will be completed in time for Uni’s 2015 graduation ceremonies in June. 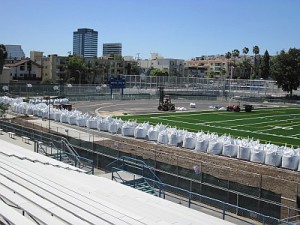 A dedication ceremony is planned to be held in August, prior to the start of the 2015-16 school year.

While this project is nearing completion, what was once the student parking lot along Ohio Avenue is now being excavated as the initial steps in the building of the Collins & Katz Family YMCA, which is expected to open in 2016. Once complete, it will give Uni one of the finest sets of athletic facilities in the City.

A casualty of the field construction has been Uni home baseball games, for which multiple scenarios have been considered. Although a conversion of the upper field (formerly known as the Girl’s Field) into a Fenway Park-type facility – complete with a short porch in right field – was suggested, the L.A. Unified School District facilities division has determined that it is not possible to place a regulation baseball facility in the available space on campus.

Uni Principal Eric Davidson reported that “the District will be assisting Uni in finding a playing site for baseball for the 2015-16 school year. They are in discussions with West Los Angeles College at this time.

“The American Youth Soccer Organization (AYSO) is interested in partnering with the District to create a (baseball) practice facility on the upper field. The facility will include up to four batting cages, two bullpens, and a regulation infield. More to follow.”

Uni has been playing its “home” baseball games at Hamilton or Venice High Schools this season, although an attempt to play at West L.A. was made. Softball will continue to be played on the upper field, but it appears that Uni will no longer have home baseball games on campus in the future.