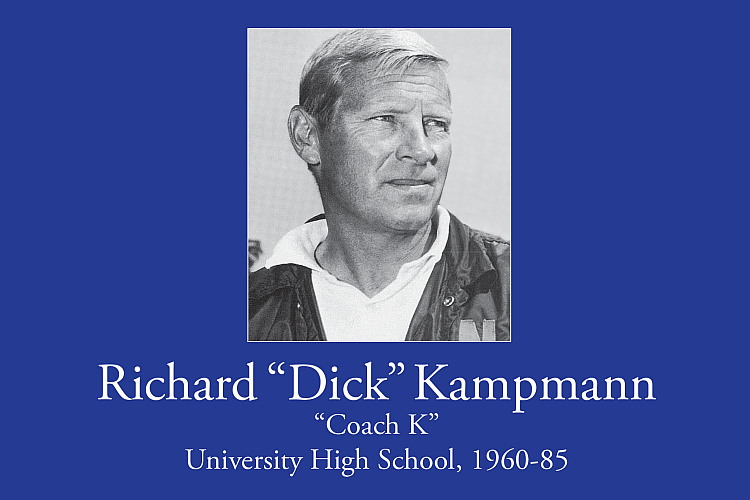 [Posted Jan. 30, 2017] To honor the greatest coach in University High School history – Dick Kampmann – a memorial service and celebration of his life will be held at Uni’s Stivelman Theater on Saturday, February 4, beginning at 11 a.m. Street parking is available and all are welcome.

Kampmann passed away on January 23, aged 92, at his longtime home in Santa Monica and was surrounded by family and friends until the end.

Many inquiries have been made about donations, flowers or gifts. Kampmann’s son, Bill Stimming, asks that contributions be made to the Coach Richard M. Kampmann Scholarship Fund, which will be administered by the Uni Hi Education Foundation. To make a contribution:

Your donations will go into a fund which will provide an annual scholarship, awarded by the Kampmann Family in coordination with the Uni Hi Education Foundation.

Coach K’s life was a remarkable one in many ways, with his enormous success at Uni just one of the chapters.

Kampmann graduated in 1950 and after some graduate studies at UCLA and USC, he entered the teaching (and coaching) profession at Gardena High School. He had stints at Excelsior High School, Horace Mann Junior High, Samuel Gompers Junior High and then Dorsey High School in the fall of 1958. There, he had great success as the cross country and track & field coach for the Dons, and in his first season, saw his squad defeat Uni, 25-32 in cross country, ending a six-year, 37-dual meet unbeaten streak of the Warriors. One of his runners was Mike Love, sixth in the Western League and 22nd in the ‘58 City Finals. Love went on to become a founding member of the Beach Boys.

Kampmann came to Uni on the recommendation of retiring coach Jim Pursell and took over with the 1960 track & field season. In his 25 years at Uni, his teams won eight All-City team titles, 24 All-City individual championships, 77 Western League team titles, 252 Western League individual championships and had a combined dual-meet record of 875-267-3.

Following his retirement from Uni in 1985, he served in the school’s administration, then took charge of the Pepperdine cross country program from 1989-2005, with eight top-three finishes in the West Coast Conference finals.

He will be much missed, but his legacy continues in the thousands of students, staff, family and friends he touched. Please join us on Saturday, February 4 for the memorial service.

Uni’s address is 11800 Texas Avenue, Los Angeles (90025) and the entrance to the theater is along Texas Avenue between Westgate and Barrington Avenues in West Los Angeles.