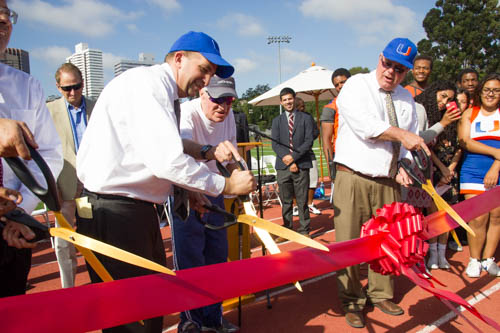 [Posted October 22, 2015] In the presence of politicians, school officials and one of Uni’s two Olympic medal winners, the school’s new football field and all-weather track were dedicated on Thursday afternoon.

The facilities were named for two Uni legends and will henceforth be known as “Richard Kampmann Stadium” after the legendary Uni cross-country and track & field coach, and “Mel Patton Track,” after Uni ‘43 grad who was a world-record-holding sprinter and double Olympic gold medalist from the London Games of 1948. The Uni Hi Education Foundation and more than 50 individual donors have raised more than $43,000 to name these facilities in their honor.

Present to watch the 33-minute ceremony was 89-year-old Craig Dixon, Uni’s other Olympic medalist, who won a bronze medal in the 110 m hurdles, also in 1948. Larry Booth, a Patton biographer who has made a generous contribution to the Uni Hi Education Foundation to help name the track for his friend and mentor, was present to represent the Patton family.

The event, witnessed by an enthusiastic crowd of more than 200 that included many Kampmann alumni and the Uni football team that will face Fairfax on Friday for Homecoming, was emceed by Los Angeles Unified School District Board of Education President Steve Zimmer, who played a key role in securing the funding for the project.

“This is long overdue,” he told the crowd, adding that “for generations, Uni didn’t have facilities which matched the quality of its teams.” He also underscored the critical role of Uni Principal Eric Davidson, who “fought and fought and fought for this” until the project became a reality.

Both Davidson and Uni Associated Student Body President Rebecca Herrera added their thanks, before the announcement that the facilities would be named for Kampmann and Patton. The football field itself was named for Uni’s first principal. Angus Cavanaugh, many years ago.

After a symbolic tossing of a football between Davidson and Zimmer and Uni football stars Paul Davis and Eugene Ford on the Astroturf field, the red ribbon over the track was cut with giant scissors by Davidson, Zimmer, Kampmann and others.

A more relaxed event will be held in the spring to honor Kampmann and Patton at greater length and, hopefully, to unveil the plaques dedicating the facilities in their name. With some luck, the event can be scheduled in conjunction with a Uni home track meet, something which has been missing from the campus for more than a decade. But thanks to the new field and track, no longer.