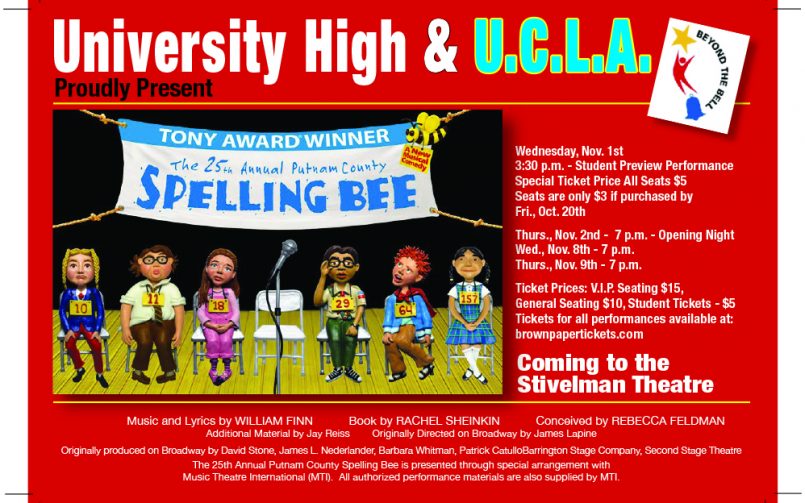 [Posted October 20, 2017] “It’s one of the funniest shows we’ve done at Uni. We are just sitting there and laughing our heads off at each rehearsal. It’s just a funny show.

So says Uni’s Director of Theater Arts, Ronnie Sperling ‘76 of the Fall 2017 Uni theater production of “The 25th Annual Putnam County Spelling Bee” that starts November 1 at the Stivelman Theater on campus.

“The interesting part is there is audience participation in it,” noted Sperling. “The authors of the show not only were the authors, they were in the show too. They came from this improv group and they wanted to make that a big part of the musical.

“The show is never the same twice because of all of the improv elements in it. From one particular line, they give you 100 different variations.

“It’s always going to be topical; you never know what’s going to happen. The World Series, the current status of the country and the White House might crop up, what’s popular on TV or in the movies might pop up.

“That’s a whole new skill set that the kids are learning, the put on this production. We judge by the late-night talk shows or ‘Saturday Night Live.’ If they’re using it, we tell the cast they can use it.”

The Spelling Bee takes you back to school in a 2004 creation by William Finn that won two Tony Awards and played on Broadway for 1,136 performances.

The pressure of the competition and the wild characters such as former spelling bee champion Rona Lisa Peretti, Vice Principal Douglas Patch, “comfort counselor” Mitch Mahoney and the spellers makes for an enchanting ride to the intersection of effort and attraction.

Uni’s Theatre Arts program is directly supported – thanks to your contributions – by the Uni Hi Education Foundation. The show is presented through special arrangement with Music Theatre International and with assistance from UCLA’s Beyond the Bell program. Tickets are available online here. The schedule:

The talented Uni actors who will perform include:

“When the calendar gets to November,” said Sperling, “and people are thinking about kicking off their holidays, this is just a fun way to start the season.” See you at Stivelman!