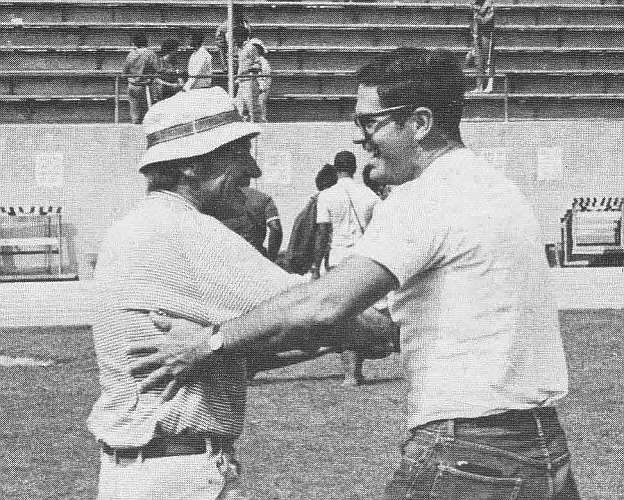 [Posted May 15, 2017] Longtime Uni teacher, coach and legend Duane LaRue passed away on May 8, based on information gathered today.

Pictured above: Duane LaRue on the right, congratulating Uni coach Dick Kampmann on the City track & field title in 1970.

Born in Los Angeles in 1935, he graduated from Washington High School and went to Pepperdine College – as it was known then – on a football scholarship. He came to Uni for the 1962-63 school year as a physical education teacher and the co-coach for football and coach for gymnastics.

He had a long and successful career at Uni, which included making the gymnastics program one of the best in the City, winning the 1970 All-City team championship. He continued at Uni for 32 academic years and finally retired as Physical Education department chairman and Athletic Director at the close of the 1993-94 academic year.

Did you know that during his early years of teaching he was also a part-time scout for the Los Angeles Rams?

LaRue was a popular figure on campus despite an outwardly gruff demeanor. He demanded effort and excellence at all levels and from everyone he worked with, but with a sense of humor – if you weren’t too scared to let it come out over time – that endeared him to many. In 1987, he was presented with an Apple Award for teaching excellence by Los Angeles Mayor Tom Bradley.

Coach LaRue retired to his home in Saugus, but suffered a serious fall from the roof of his house in 2003 and suffered lasting injuries to his memory.

9 thoughts on “Coach and teacher Duane LaRue passes at 81”