The upset did not go unnoticed, with significant coverage from the Los Angeles Times and from the online Los Angeles Sports Journal. From Eric Sondheimer’s coverage in The Times:

Let’s just say that Coach Lee Lowe and his players were thrilled.

“I had kids crying,” Lowe said.

The last time University defeated Venice was in 1996. Some players were 2 and 3 years old.

Lowe, a former University defensive coordinator, took over the program four years ago.

Tyrone Nelson ran for 67 yards to open the scoring on Uni’s first play from scrimmage. He rushed for 217 yards in total and scored the Wildcats’ second score on a four-yard run in the second quarter. Venice scored before the half to close to 14-7 at the break.

Uni’s defense held Venice scoreless in the second half. Cornerback Thomas Clay saved the game with an interception of a Gondolier quarterback Robbie Blosser pass from the Uni two-yard line in the third quarter, and Venice never got that close again. 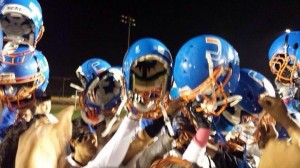 Because of the continuing renovation of the Uni football field and track, the Wildcats will continue their 2014 road show this Friday at Hamilton at 3 p.m. The Yankees stomped Fairfax, 45-0, to open Western League play; they are 3-2 on the season.