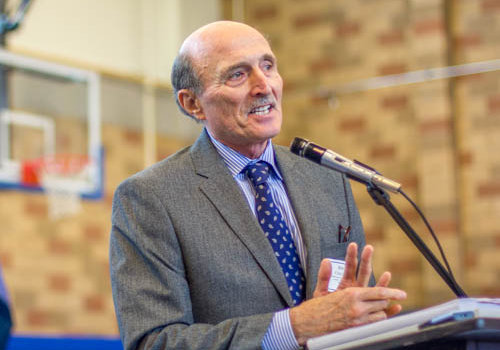 [Posted July 8, 2016] Athletes, authors, entertainers and a couple of alums who were elected to the United States Congress are among the 27 selection of former University High School students listed in the initial compilation of 1,226 members of the Los Angeles Unified School District’s “Hall of Fame.”

The project was developed by 1963 Uni grad (and former LAUSD principal) Bob Collins and his wife Sandy, and former Venice High School teacher Grant Francis. An initial list of more than 10,000 names was narrowed down to 1,226, but more will be added over time.

“Just because you played pro football didn’t get you on the list; you had to have a definable impact on the community, nation or state,” said Collins in a statement announcing the project last January.

He awarded plaques recognizing two “Hall of Famers” who were featured at the Kampmann-Patton Honors Luncheon on May 15: Uni alum Mel Patton ‘43 and Coach Dick Kampmann, who made his mark at Uni over 25 years as cross-country and track & field coach, but who attended Washington High School in Los Angeles.

Collins also encouraged individuals to submit additional names for consideration, and you can do so by downloading the nomination form here, filling it out and sending it in via e-mail to Grant Francis (see the first page of the form for instructions).

The 27 former Uni attendees who made the initial list include (class years guessed if not listed):