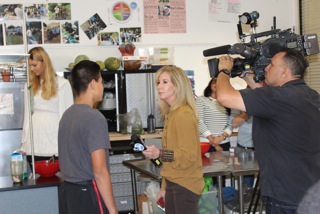 Uni in the News: Health and Football!

[Posted October 28, 2014] Excel and you will be noticed. Local television stations KABC-7 and KNBC-4 both found stories they liked at Uni that have aired, or will air, this week.

Coming up on Thursday (October 30), an in-depth report is scheduled to air on the second edition of “The Uni Project,” featuring Kerri Eich’s health class and the NutriBullet program of healthy breakfast shakes.

KABC’s Lori Corbin, “The Food Coach,” came to Uni on October 9 to see the “Blast Bar” in person and to speak with the students on the benefits of healthy eating. She has been offering tips to viewers for more than 10 years and was highly impressed by the program she saw at Uni.

“It was great for our students,” noted Uni’s Eich, noting the visit came just three days after the on-campus premiere of “The Uni Project” documentary. “They were rock stars. [Lori has] already volunteered to come back and help us with our healthy athletes program. It was such a powerful week.”

Corbin’s report on Uni is scheduled to first appear on the 5 p.m. edition of Thursday’s Eyewitness News and will be posted to the KABC Web site after that for on-demand viewing. 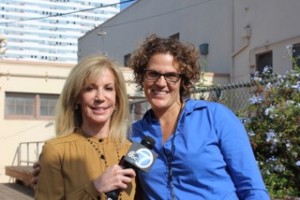 KNBC-4’s Mario Solis looks for unusual stories in sports and found one in Uni senior Gabriela “Gabby” Rodriguez, who wears no. 19 as a wide receiver for Uni’s varsity football team. Yes, a female football player!

Rodriguez and football coach Lee Lowe are featured in the story, which chronicles the development of her interest in football. According to the Uni stats page on MaxPreps.com, the 5-6 Rodriguez has appeared in all seven of Uni’s games this season, but doesn’t have a reception yet.

Pretty good coverage for one school in one week. You go, Wildcats!