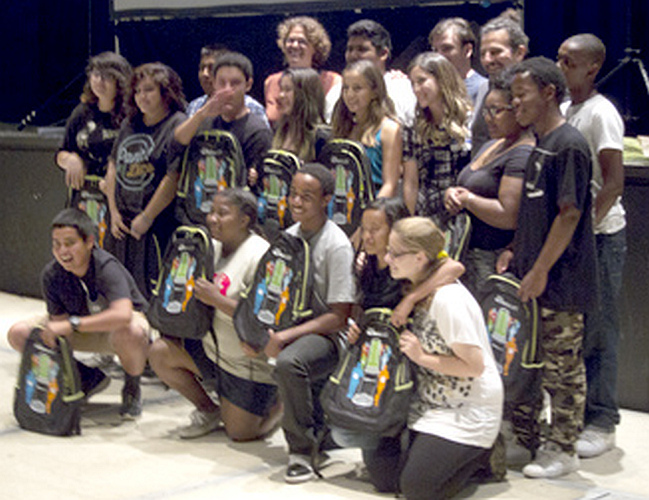 “The Uni Project” Screening Showcases the Value of Vegetables

[Posted October 15, 2014] Kerri Eich wasn’t sure if a public-private partnership program to help her first-period health class to eat fruits and vegetables would have any impact.

In front of more than 200 enthusiastic attendees at Uni’s Stivelman Theatre, Eich celebrated the success of “The Uni Project.” In coordination with blender maker and healthy-eating evangelists NutriBullet, the amazing story of Eich’s students was shared during the screening of a 39-minute documentary. In it, the project showed that high school students who don’t normally eat breakfast could be encouraged to not only consume a morning meal, but one which incorporated green vegetables as well as fruit. 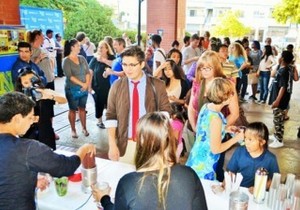 The celebration started outside with a “Blast Bar” similar to the one which the students had access to in class. Students who completed the program staffed the bar – Mejrema Kupinic, Josh Weston, Victoria and Nicholas Sand, Sierra Juncaj, Edwin Ruiz and Trisha Tabbay – and answered questions. The primary “Blast” recipes, compiled under the supervision of a registered dietician, are available here.

After the screening, the students participating in the program were presented with gifts from NutriBullet, accompanied by Eich and Uni Principal Eric Davidson. A specially-made backpack with the NutriBullet logo was given to those who participated in the program, along with $10 iTunes gift cards. In addition to those who worked the Blast Bar, Emanuel Luis, Makayla Morales, Darius Gains, Maggie Ramirez, Chayse Richardson, Gladys Sanchez, Juliana Sandoval and Bryan Spencer, all received recognition. 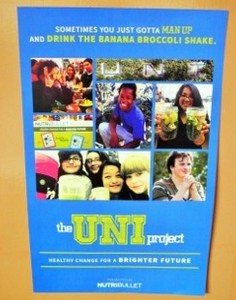 Although the sample size of a single class was small, there were significant findings from the program, summarized in an after-action report available here.

After the screening, a gala dinner was held in the Uni Grove for all attendees, impressively staged by Chef David Linville and Uni’s Food Science students.

It was a great success, but Eich is hardly done. The program will continue.

“We are hoping for 100 + participants in the Spring, and last Friday [October 10], I brought in football team quarterback Paul Davis and a few linebackers and fed them banana spinach, chia, hemp seed and coconut water blasts. They all smiled and told me they were delicious.

“I also had about 200 bananas left over. During Period 6, every [football] player had about four bananas. None of the guys cramped [at] Friday’s game, and it was the first win against Venice in 20+ years. So the power of fruits and veggies are working their way through Uni to help our students and athletes.”

Is this the start of Uni’s athletic ascension, thanks to fruits and vegetables? Why not? After all, Eich is also the men’s volleyball coach.