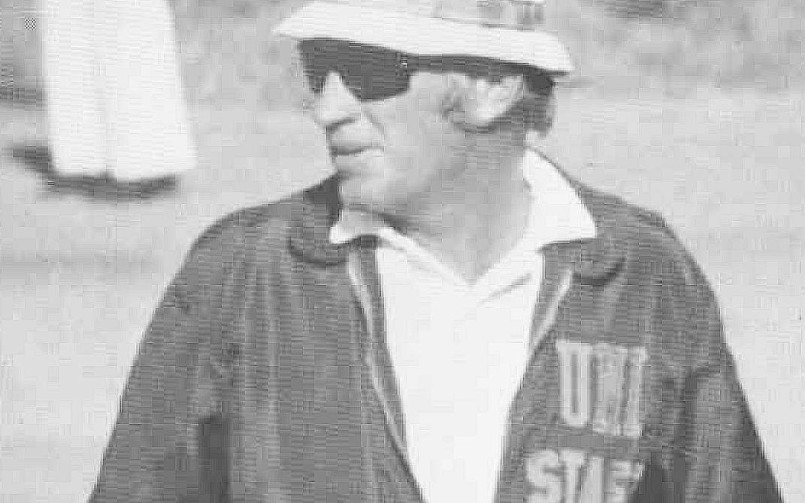 [Posted October 18, 2015] The stunning new AstroTurf football field and Rekortan running track at Uni will be formally dedicated by the Los Angeles Unified School District on Thursday, October 22, at 2 p.m., at the new facility.

The public will be welcomed to the field area, where LAUSD Board of Education President Steve Zimmer – in whose District 4 area Uni is located – will preside over ceremonies marking the amazing transformation of Uni’s athletic field and track from one of the worst in the City to one of the best.

At the same ceremony, the combined facility will be named for Uni’s most successful coach, Dick Kampmann. Still going strong at 90, Kampmann was the head of the physical education department at Uni and coached cross country and track & field from 1960-85. During that time, he changed the lives of hundreds (if not more than a thousand) young men and women through his leadership and teaching skills. He also compiled a brilliant competitive record, with eight All-City team championships (7 in cross country, 1 in track & field), 24 All-City individual champions, 77 Western League team champions, 252 Western League individual champions and 875 dual-meet wins, vs. 267 losses and 3 ties (a 76.6% winning percentage!).

The track will be dedicated in the memory of the greatest athlete in Uni history: sprinter Mel Patton ‘43. After graduating from Uni as the school’s record holder in the 100 and 220-yard dashes, he served two years in the U.S. Navy during World War II and then went on to a great career at USC, winning three NCAA individual titles and setting two world records. At the 1948 Olympic Games, he won gold medals in the 200 m and on the 4×100 m relay, making him the only gold-medal winner in Uni history.

Street parking is available for the ceremony, and guests can enter through the main entrance (a long walk to the field), or from Westgate Avenue (closer) or Ohio Avenue (very close).

“Richard Kampmann Stadium” will have its interscholastic debut the following day when the Wildcats take on Fairfax in the 2015 Homecoming football game at 7 p.m. The first use of the “Mel Patton Track” will take place in the spring as Uni’s hosts a home track meet for the first time in more than a decade.

Thanks to the devoted support of Kampmann alumni, Patton fans and friends of Uni, more than $43,000 has been assembled to support the Uni cross country and track & field teams. Plaques honoring Kampmann and Patton – and the donors – will be unveiled in the spring.