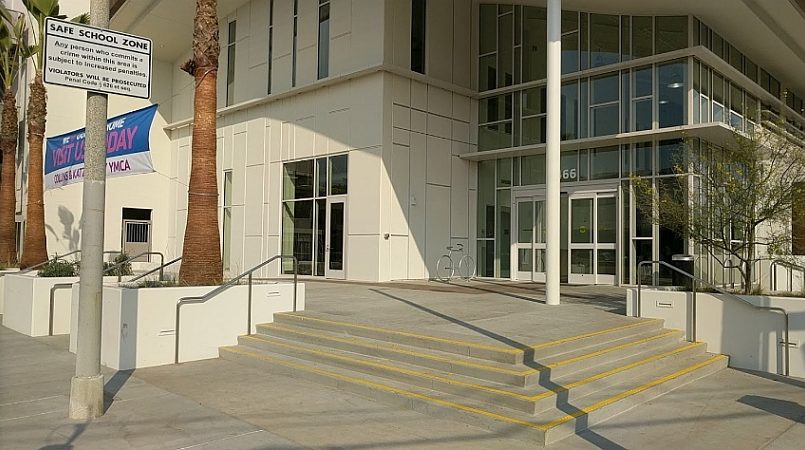 [Posted December 11, 2017] The long-awaited Collins & Katz Family YMCA formally opened its doors on Saturday, December 9, completing the more than six years of planning and building on what used to be a seldom-used corner of University High School.

The section of Uni at the corner of Westgate and Ohio Avenues was for years home to four classroom bungalows which were used mostly for storage. That all changed when the Metropolitan YMCA decided it needed to expand and modernize the Westside Y building at 1947 Sawtelle Avenue (at LaGrange), which was too small to house the interest and needs of the community.

A unique 2008 partnership with the Los Angeles Unified School District resulted in an agreement to remove of the old bungalows, a restroom, storage and locker room building, two tennis courts, basketball and handball courts adjacent to the football-field bleachers, and to the build what is now known as the Collins & Katz Family YMCA. As is typical of construction in Los Angeles, the Environmental Impact Report was completed in 2012 and the building was expected to be completed in 2014. Three years later, the doors are finally open.

The grounds of the new YMCA have been leased from the LAUSD for 40 years with two, 20-year extensions. The compact footprint holds a four-story parking structure with about 181 spaces, and a main building with the welcome center, community room, swimming pool, locker rooms, playing courts and exercise facilities.

The old Westside Y building – opened back about 1972 – which was also the home of Uni’s swim meets for many years, is being replaced by a mixed-use building with 76 residential units above ground-floor commercial space.(details here).