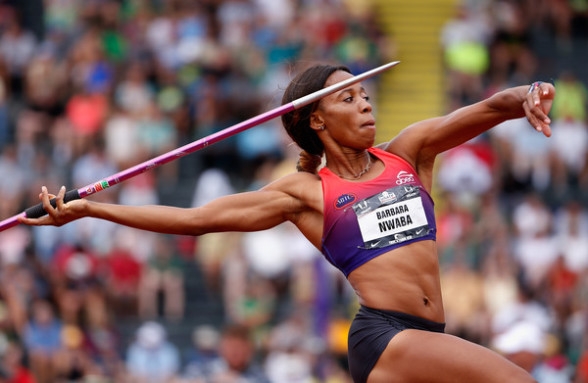 After becoming the U.S. Heptathlon champ in 2015 (see her throwing the javelin above) and competing for the United States in the World Track & Field Championships last summer in Beijing, China, she won the U.S. indoor Pentathlon title in Crete, Nebraska on February 26-27 with 4,415 points. Her marks included:

The UC Santa Barbara graduate qualified to represent the U.S. in the World Indoor Championships in Portland, Oregon on March 18 and performed marvelously, setting a new personal best of 4,661 to place fourth, her best finish ever in an international championship. Her marks:

Her score makes her the sixth-best American ever in the indoor pentathlon, and she finished just 109 points short of the bronze medal. A great performance which portends well for her chances to make the U.S. Olympic Team this summer and participate in the 2016 Olympic Games in Rio de Janeiro, Brazil!