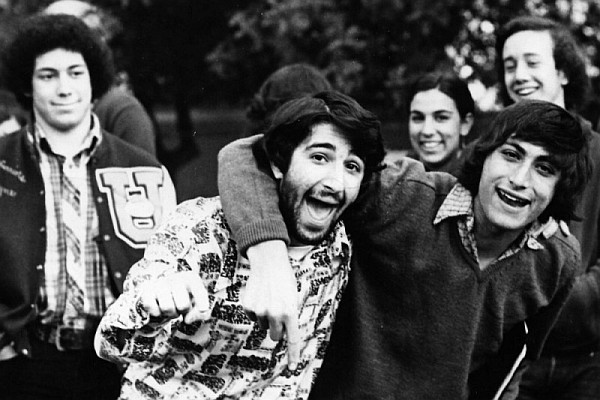 A Warrior in need: Dick Agbabian ‘75

[Posted April 10, 2016] Ella Fitzgerald and Bill Kenny sang “Into Each Life Some Rain Must Fall” way back in 1944. That’s as true today as then, but for some, there is a little more rain.

Pictured above: Dick Agbabian ‘75 (center) in happier times at Uni

For those who remember Dick Agbabian ‘75, a happy-go-lucky personality who enjoyed a laugh as much as playing varsity baseball, the skies have been dark for some time. And getting darker.

His sister explains the tragedy on their fund-raising Web site:

My name is Rose Porterfield. I am Dicky Agbabian’s sister and am reaching out to all his friends and family in the hopes that you might be able to help.

As many of you may know, 37 years ago when Dicky had just turned 21 years of age, he was the victim of a doctor’s negligence during surgery to remove a lump from his thyroid. The attorney handling the case certainly did not have Dicky’s best interest in mind and our parents, who only wanted their son back like he was, were forced into taking a settlement that was so unfair and unjust. We did our best to make that money last as long as possible and provide him with the best care we could. Thank God we were blessed with an incredible care giver, Kawsar, who has taken care of him for over 30 years now. Dicky lives at home and cannot walk, talk, care for himself and suffers from brain damage due to the lack of oxygen during the surgery. It is a really sad situation as Dicky was just beginning his life and trying to fulfill all his dreams when this horrible incident pulled the rug out from under his feet as well as our entire families. Our dad passed away 24 years ago and we just lost our mom on March 29, 2015.

I am trying to raise money in order to continue giving Dicky the care he needs. We have come to the end of the line with his money and have recently made the decision to move him out of the home he’s lived in for most of the years following the surgery. I was doing everything I could to keep him and Kawsar in the house, especially after mom passed, but we unfortunately reached a point where that was no longer an option. We are thankful the money from his settlement has lasted this long, but, we are almost completely out now and need to raise money and find solutions to supporting him.

The money will be raised to pay for his incredible and dedicated caregiver, medical care and household items. It will also allow me, his only sibling, a little time to put things in order and figure out the best situation for Dicky will be. The last thing I want to do is put him in a facility and I will do whatever I need to in order to avoid that. I am certain, in Dicky’s current physical condition, he would not last 2 months in a facility due to the fact that he cannot communicate his needs, and unfortunately, he is not getting any better.

We need the funds as soon as possible as we only have about 2-3 months at the most before the money he has left is gone. I was praying that we would never get to this point, but we have arrived and now I have to do my best to make sure that I do everything and anything I can for him. He deserves that and the thought of having to move him into a facility after all these years is heartbreaking.

I would be eternally grateful for any and all gifts you are willing to offer. This is a difficult thing for me to do, asking for help, but, my brother is a wonderful person and truly deserves to be comfortable, safe and peaceful for as long as he is here on this earth. Also, if you feel more comfortable issuing a check you can make it out to Dickran Agbabian and mail it to his home address which is 3350 McLaughlin Avenue, Los Angeles, California 90066.

I thank you in advance for your kindness and generosity and hope that we can work together to keep Dicky comfortable and supported.

Ronnie Sperling ‘76, Uni’s director of Theater Arts and a year behind Agbabian (also a thespian!) when both were Uni students, has dedicated the April 26-29 performances of Disney’s “High School Musical” at Uni to honor him.

Please give if you can, but remember Dick for the vivacious person he was.