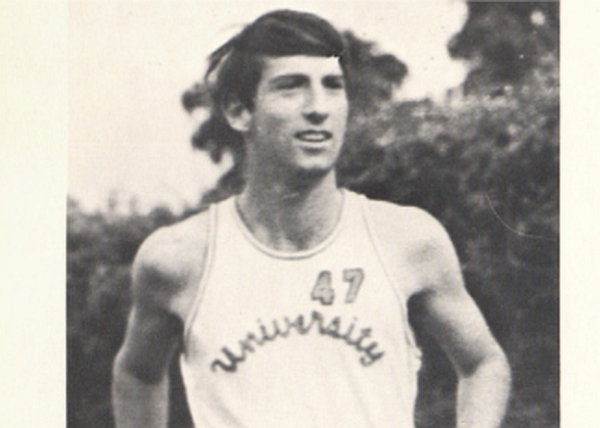 [Posted February 15, 2018] One of the outstanding athletes in Uni history, Steve Baum, lost his unhappy battle with cancer on February 5, at the age of 66.

What made Baum so important was his impact on others. From being a would-be basketball star who figured out quickly that he should choose another sport, Baum made himself into a champion, under the tutelage of Uni coach Dick Kampmann, and a paradigm that Coach K would use for decades to motivate others.

Baum explained the transformation at the unveiling of the plaques for Kampmann Stadium, Patton Track and Cavanaugh Field in mid-2016:

“In my case, being a virtual only child and an outsider by nature, I desperately needed to belong, to be part of something.

“Cross country was perfect: a team sport where everyone underwent the same ordeal, confronting their limitations. Beyond that, being part of Uni cross country was being part of a winning tradition, among the City’s best year in and out. That success was neither accidental nor due to an abundance of talent, but our shared desire to become the athlete and person Coach K knew we could be. While that demanded a huge commitment and plenty of pain, we loved it. We rooted each other on, knowing the fifth man was more important than the first. We pushed ourselves and each other, wanting to please a man who never neglected to acknowledge our accomplishments, no matter how big or small. …

“But even then, though tough and demanding, he was never cruel or demeaning. He expected a lot but gave even more. Being on his team was being part of a family – which is obvious in this room today, but harder to realize at a time when family was something many of us longed to escape. For me, the son of a father for whom nothing was ever good enough, Coach provided the acceptance and inspiration I desperately needed.”

Baum made the most of his chances. He got up to sixth All-City in 1967 and then, driving himself harder, was Western League and All-City Cross Country champion in 1968. On the track, he was the Western League Two-Mile champion in 1969 and finished fourth in the City Finals. His best of 9:14.9 in 1969 was the Uni school record for 10 years, until Paul Medvin ran 9:03.1, and is still the no. 2 mark in school history. Baum also ran 4:20.0 for the mile, still no. 4 in Uni history.

A writer for television in his professional life, Steve is survived by his wife Clare and daughters, Alana and Mira. Additional details are here. Our condolences to his family and his Uni teammates, whose admiration and anguish has been circulating continuously since his passing.